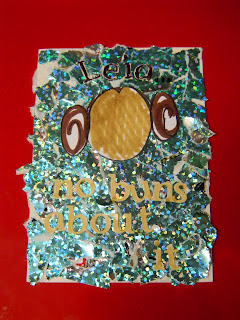 I'm not the biggest Star Wars fan that every lived, but I do enjoy watching, "The Empire Strikes Back," in the middle of summer when it's three-thousand degrees. All of the snow on Hoth really puts me in the right frame of mind. Unlike Star Trek, I find most of the main characters in Star Wars to be wildly annoying and one-dimensional, except Darth Vader. I can totally relate to a guy like that, even if he is insanely evil. With that being said, I made a Leia card (yeah, I'm not sure how my mind works, either).
The holographic paper that I used in the background doesn't make for a very flattering photo, but it looks pretty sweet in real-life. I used the scraps of wrapping paper that I used to cover another craft project, and I'm feeling pretty self-righteous about my recycling for another craft project.
What is it about the buns that seem so enchanting?

at 10:32 AM
Email ThisBlogThis!Share to TwitterShare to FacebookShare to Pinterest
Labels: atcs, Crafty, Star Wars