When I was around kindergarten-ish age, my mother worked across the street from our house at the local bar as a cook/bartender. There were a lot of locals and truckers that came in and out throughout the day to have a few and spend their disability dollars...or whatever it was they were using while still being able to go to the bar on a weekday.
Anyway, the owner's son, Beaver (not the funny part), told me that the machines in the bathroom that I asked about on several occasions held combs. You know, "combs." I distinctly remember really wanted a comb, but my mother wouldn't let me get one. I can remember thinking, "What's the big deal? It's only a comb. Why can't I have a comb?"
It wasn't until SEVERAL years later that I found what these magical machines actually dispensed. Actually, it was probably way too many years later that I realized what these machines were for. Where was I when all of the bad kids that sit in the back of the bus and talked about inappropriate things that they didn't really know anything about (or worse, they actually did know something about)? 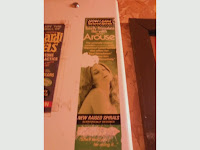 Anyway, I was at a local bar on Saturday night and I saw one of these "comb dispensers," that could've very well had the image that I saw when I was a youngster.
All I can really think is: how could I possibly have thought that this was a comb dispenser? She must REALLY like to have her hair combed. That's all I can figure.

at 4:33 PM
Email ThisBlogThis!Share to TwitterShare to FacebookShare to Pinterest
Labels: Combs