So I went to Volant, PA yesterday. I'd heard that it was a fancy place to spend a Sunday, even though I should've probably waited until it wasn't hotter than Hades. I found this photo of what I want Volant to look like. So upon first inspection, Volant looks like a cute little creekside town smattered with pretty houses that have been converted into pretty shoppes with porch swings, curtains, and lots of things that smell.


This morning, I was looking in my purse for my awesome Clinique Black Honey lip gloss and all I could smell was that smell. That smelly smell. That smelly smell that smells smelly.
Working in the candle shoppe, I'm the victim of a lot of smells that I don't want to smell. (Who wants a candle that smells like Banana Cream Pie? Dear GAWD)? None, though, are as offensive as the smell that comes from country prim stores. It's like a mixture of those grubby candles that always smell like vanilla buttercream and fake peaches or pumpkin, lacquered twigs, silk flowers and lots and LOTS of outdated potpourri. It's like the candle shoppe married the craft store and had millions of really fragrant babies.
I should clarify, country prim is lovely if you like that kind of thing. I like looking at country prim and thinking about what it would be like to have the kind of house that would be charmed-up with country prim, but I don't buy country prim and I don't want to SMELL like country prim.
Why, you ask, did I go to Volant? I've been trying to do something different every week. The Furry Convention once week, Pride Parade the next and if Nemacolin Woodlands Resort wasn't $400/night, I'd go there, too. (Who do they think they are, anyway? They're in PENNSYLVANIA. HELLO?!) Doing something that I've never done before has really helped me deal with the day-in and the day-out of missing Dustin and juggling the household chores and goings-on.
I was hoping for more antique stores/junk shops full of retro junk or a old-fashioned, but completely functional, percolator. Instead, I got a lot of crinkly snowman faces painted on fenceposts.
I did get some Highlander Grogg, though, and that was awesome. This flavour reminds me of mornings hanging out with Mr. Dustin.  I'm not a huge fan of flavoured coffee, but this one is exceptional. In my new (and unfortunately brand new) percolator, this is quite a treat.
Break out your bagpipes and don your kilts. This butterscotch and Irish cream flavor is sure to bring out the Scot in anyone.
Highlander Grog is one our oldest and most popular flavors. A very creamy, rich butterscotch flavor. Maple, butterscotch, yummy.
Don't let people dissuade you from the percolator. Coffee snobs say that it doesn't work with high-end coffee, but with the right grind and knowing your place in the world, it's delicious. If it's good enough for your grandparents, it's good enough for you...so remove that stick from your ass and have a cup of coffee for chrissakes.
I've seen some wonderful recipes featuring this coffee. I may have to check it 'aht! Well, not this one. It has chocolate in it.
From this awesome site!
Marbled Mocha Highlander Grogg Cupcakes
makes 24
3 oz bittersweet chocolate
3 3/4 cups cake flour
1/2 cup Highlander Grogg coffee beans, ground
seeds of 1 vanilla bean
2 Tbsp baking powder
1 tsp salt
2 cups granulated sugar
2 sticks organic butter, softened
4 large organic eggs, at room temperature
1 Tbsp pure vanilla extract
2 tsp coffee extract
2 Tbsp bourbon
1 1/3 cups milk
Frosting:
2 sticks organic butter at room temperature
4 cups powdered sugar
2 Tbsp milk
2 tsp coffee extract
Tbsp pure vanilla extract 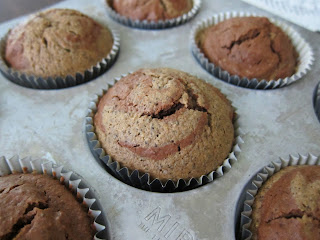 Preheat oven to 350 degrees. Place liners in two 12 cup standard muffin tins. Melt chocolate and set aside. In a medium mixing bowl, mix together the flour, coffee grounds, vanilla bean, baking powder, and salt, and set aside. In a large bowl, cream the butter and sugar together on medium high speed until light and fluffy. Add eggs one at a time and beat well after each addition. Add extracts and bourbon and mix until incorporated. Add flour mixture in 3 additions, alternating with milk until all is added, and well blended. Divide batter into approximately half mix chocolate into one half until well blended. Drop batter into muffin tins alternating plain and chocolate, then swirl with a toothpick. Bake at 350 for 20 minutes, or until a toothpick inserted into the center comes out clean, but do not over bake. Cool completely on a rack before frosting. To frost cupcakes, place butter in a large bowl, and beat with an electric mixer until light and fluffy. Add about 2 Tbsp milk, the coffee extract and vanilla extract. Beat until combined, then add powdered sugar about a cup at a time until frosting is a spreadable consistency. You may need more then the 4 cups, and if it becomes too thick add a little milk. Spread frosting atop cupcakes and serve!