The Kitten With Many Names. Day Five 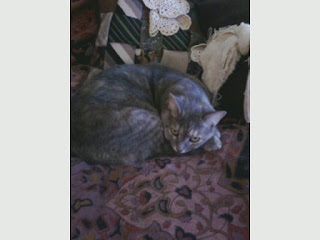 Turn Ons: Attention from the Other Cats, Passive-Aggressivity, Treats, Hiding Under the Daybed, Getting Lost in the Kitchen, Chasing the Broom
Turn Offs: Strangers, Being Pet or Held by Humans, The Vacuum, The Coffee Grinder 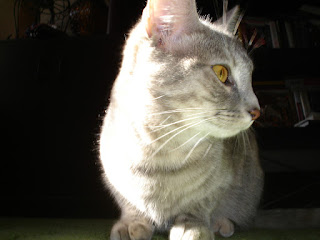 Veruca has several names. When I found her at PetSmart (I have since learned to not visit the orphan cats unless I want to become an animal hoarder), she was a demure little kitten. Now, she looks like a stout little linebacker, and she earned the name, "Kitten The Hutt." When we were thinking about names for her, Dustin wanted to name her Truckasaurus and I wanted to name her Doris. In turn, she's been Truckasaurus and Trucker...because Dustin won't let it go. Her official Christian name is Veruca, but we rarely, if ever, call her that. She answers to Kitten mostly...but secretly, I still want to call her Doris.
When I brought her home, she immediately adopted Bertrand has her mother (who wouldn't adopt that homo? He's like a big motherly queen.), and definitely turns to the other cats for affection and comfort when she's scared. She tries to cozy up to Vendetta, too, but usually that ends with an injury. She loves Dustin the most of the humans in the house, but tolerates me to pet her once a week...in his absence. When company comes over, she's a ghost. What a little turd. 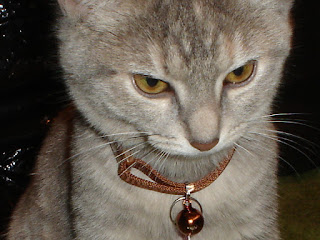 Kitten the Hutt is not amused with your antics.
﻿

at 10:01 PM
Email ThisBlogThis!Share to TwitterShare to FacebookShare to Pinterest