Vendetta, Vendetta, You Are My Friend-Etta. A Five-Day Photodocumentary 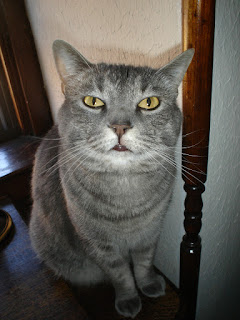 Turn Ons: Chocolate Coins, Shoes, Hiding under the Bed, Hitting the Other Cats, Growling, Being Fed Separately from the Other Cats, Being a General Bitch, Black Clothing when You're Ready to Walk Out the Door, and Having her Face Scratched Vigorously (like, a little too Vigorous).

Turn Offs: Cleaning Herself, Touching the Other Cats, Touching People, Having to Share, Having Her Claws Clipped, and Being Nice to People. 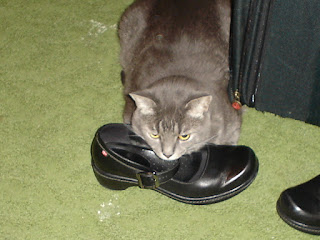 ﻿Vendetta is the oldest and sassiest of the cats. We adopted her in July of 2006, and she's been thoroughly pissed-off every since. The day that we got her, she touched her nose to Dustin's nose and that was the nicest thing she ever did. We named her after the villainess from the webtoon "Making Fiends," and it has been an incredibly fitting name. Her middle name is LaFawnduh, but I'm not sure if she knows that.
I have a special place in my heart for her because she was the first and was a signifier of a major commitment that Dustin and I made together: pet ownership. This has since been a commitment that we take very seriously. Unless she misses the litter box...then we're just pissed. 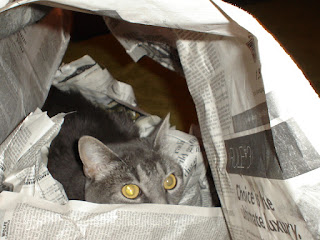 at 10:14 PM
Email ThisBlogThis!Share to TwitterShare to FacebookShare to Pinterest