My Other Ride is Plastic Bertrand. Day Two 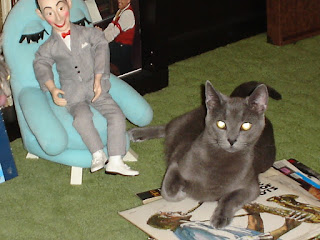 ﻿
﻿Turn Ons: Laying in the most inappropriate spot when you're trying to do something, Meowing for treats, Temptations (the treat, not being tempted), Looking Nice, Boots Randolph, Pee Wee Herman, Meowing at the bedroom door, Chirping at the Birds, Dragging Towels into the middle of the living room and kitchen floors, Being petted all day and all night until your arm is just a stump.
Turn Offs: Strangers, Children, Loud Noises, Large Gusts of Wind, No Treats, Being denied access to the bathroom when you're in there, Not being allowed to crawl up your ass. 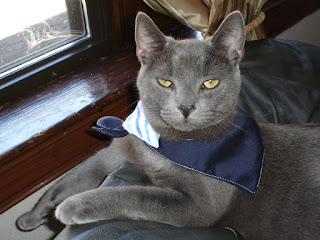 Do you know how mothers say that they can't pick a favorite child? Well I can, Bertrand is my favorite cat and I can't lie about it. Bertrand is the only boy of our herd, and he's by far the most feminine. We're positive that he's gay and he's pretty proud of it (and he likes to sit on Dustin's lap way too much. Not that Dustin is gone, he'll settle for sitting with me, but he doesn't like it). He is terrified of strangers and children (especially children) and rarely comes out to see a guest unless they've been here several times before. When he does come out, though, everyone gasps at his regal look...and he loves it. He's such a conceded twat.

When I met Bertrand I was at this woman's house and she was running a shelter our of her basement. The sight was pretty sad, but she was really trying to do the right thing. Bertrand, then Smokey II, was one of the smallest cats and was being beat up by all of the other cats. He was snotty and gross, but something compelled me to take this disgusting little cat home. When I brought him home, Dustin looked at me with this look that said, "Really Jessica?" After a few vet's appointments to deal with all of the parasites and sicknesses, he quickly became a fat and beautiful homo. Vendetta liked him as a sickly young cat, but can't stand him as a robust adult and avoids him at all costs (just like she does with the rest of us).

Bertrand is named after Plastic Bertrand, a French/Belgian pop singer whose most famous song is "Ca Plane Pour Moi." You've probably heard it. His middle name is Onslo and knowing what a rotund cat he was going to become, we might've named him Onslo from the start. 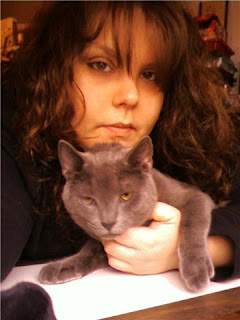 This was supposed to be our engagement photo. Then Bertrand outed himself and I married Dustin instead.

at 10:50 AM
Email ThisBlogThis!Share to TwitterShare to FacebookShare to Pinterest