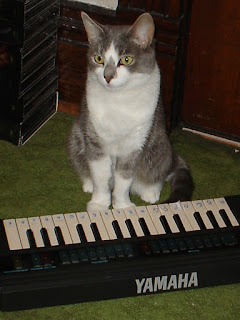 Turn Offs: Being Held, Not Having Cheese, Getting yelled at for scratching up said inappropriate furniture, Being Chased by Bertrand, and Dirty Water. 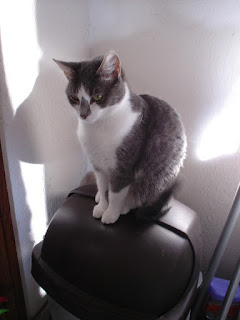 The Demure Trashcan Look.
When we got Eleanor it became a slippery-cat-slope. Dustin and I had made a habit of visiting cat orphans at PetSmart and Petco and when we spotted Eleanor, we were sort-of looking for a cat. She was playing in her cage and was able to completely pick up a toy and hold it with her paw. Dustin was completely in love with that, and the little diamond pattern on her nose. I knew that was it. When we were naming her, we put a bunch of names on post-it notes and decided whichever stuck to her, would be her name. Her middle name is Blanche, the second post-it that stuck to her. I often wonder if she's more of an Eleanor or a Blanche. What a lady.

Eleanor went through a stint of randomly pooping on things (unbeknownst to her)...which was really fun. She pooped on Dustin, which was incredibly amusing but kind of distressing, too. Just when we thought we were at our wits end with the bowel issues, it mysteriously cleared up. We still attribute it to that three-year Rabies vaccine they eventually took off the market.

Since the grossness subsided, I've really gotten to know Eleanor as our most cat-like cat. She's inquisitive, mischievous, cunning, intelligent, independent and defiant. She wants pet when she feels like it and doesn't care about my feelings. She's also incredibly secure and full of self-esteem. A real motivator. 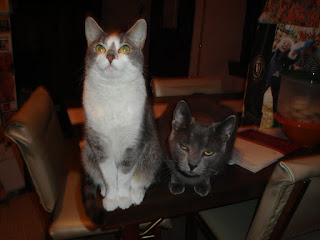 at 12:00 AM
Email ThisBlogThis!Share to TwitterShare to FacebookShare to Pinterest