Yesterday, I drove to Charlotte, NC to do some visiting. Because I am a Nana with an inability to sleep through the night, I managed to get out of the house and on the road by 5:30am. The drive was rainy and dismal, but the traffic was light and unobtrusive. Then, I hit the fog. 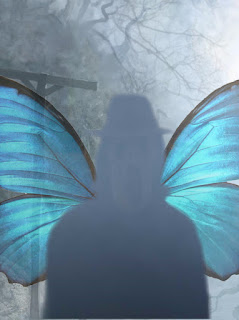 Going over the Smoky Mountains (or the Appalachian Mountains or wherever I was in the stretch of my trip) is supposed to be one of those experiences where I thank whatever godhead I can think of at the moment for such a beautiful and charming landscape, but instead, I was paralyzed with the fear of slamming into a truck or being eaten by a winged fog-monster.
I've driven in a variety of really harrowing weather experiences (including in the thick of a bunch of mildly-retarded southerners ﻿during an ice storm), but the fog is not just an atmospheric occurrence, it's the symbol of the unknown. When you can't see what's fifty yards in front of you, you can't possibly prepare yourself for the emotional turmoil of what lies ahead. It could be absolutely anything: A Yes reunion concert, a horrific auto accident, a Mary Kay convention...and each idea after those are even more horrific than the last.
After getting to Charlotte, I was unpleasantly surprised by the cold and clouds that met my arrival and continue to linger through my stay. Not that I'm ungrateful for a chance to get hell of out Pittsburgh, but I was really looking forward to the sun and a mild spring day. Charlotte's flowers are still beautiful and welcome sight from the unpleasant and ruddy vegetation in the north, but they would be that much better with a little sunlight to shine on them, just saying.

Despite that, there is one plant that has continued to enchant me: Wisteria. It's everywhere here...growing like a fast and loose lady.
When I was still living at home, we would often pass this overgrown house on our commutes. The only Wisteria plant that I've ever seen in the "wild" of Western Pennsylvania grew like a soft and purple blanket over that wreck of a home and my mother and I would often comment on what a great plant it was. One day, we were horrified to find that someone had completely mown the entire area, with complete disregard for such a graceful and rare plant. Fuckers.
Despite my never wanting to actually own a home or have a yard to mow, I often dream of tons of Wisteria and other flowers completely crowding my living space...lying wistful and lazy all over the paths. Or maybe an overgrown and whimsical hedgerow with yards and yards of morning glories winding their way through the branches.
Basically, I want to live in rural England milking goats and making my own soap. Until then, though, I'll settle for Wisteria and a trip to Charlotte.