Bela Lugosi's Dead
Truth be told, I'd probably be a goth kid if I had enough time to get ready everyday. I love goth culture, but I fear that I really only love it ironically. I think, though, that the essence of goth is really understanding the futility of everyday living. If that's true, then I've got goth pretty much mastered.
There comes an age where dressing like a fancy bat is really just not cool. While there are plenty of off-shoots in fashion that allow for people over the age of nineteen to wear goth-style clothing (i.e. corpgoth), it can easily get out-of-hand.
Anyway, Dustin and I try to embrace goth culture in a way that's a little more sophisticated and a little less...sitting at Denny's until 4am drinking coffee and writing in your journal. So, Dustin made an assignment for both of us to write a goth poem. They didn't have to be good...which is nice, because they aren't.
Dustin's Poem
Tendons stand along a pale neck
Undressed in sanguine fantasy
Palpates every breath blood-flecked
Under duress apostasy
A-quiver with repulsive scorn
Bombazine shrouds the cantor of sin
Gathering to feast the firstborn
Lovelorn, the wayward gates turn in
Shadows cling to her heaving breast
Whisper betrayals of disease
A dance to which the slags molest
The purest mind a soiled chimney
My Poem
Autopsy Aphrodisiac,
Flotsam death shroud lunacy.
Diseased and blackened tongues in quivering holes,
Unleashed the sicker luciferi. 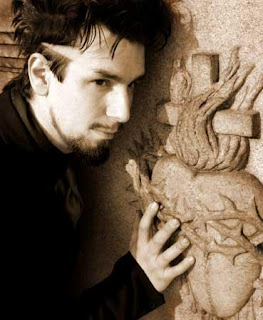 Have Mercy, I do believe I'm getting the vapors.