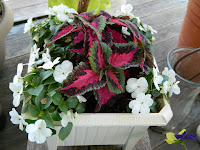 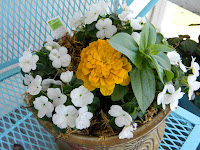 So I finally got around to taking photos of the rest of the flowers that I planted. The original photos showed some of the Coleus and Zinnias and I've filled in the blanks with white Impatiens. My mother used to plant this shade-loving plant in the darkest corners of our property, but I was surprised to see that they actually don't mind partial sun (like, less than four hours). When I purchased them, they were half-dead and had barely any blooms, but in the containers, they've really taken off! They've also  complimented the primary Zinnias really nicely, and they're full of buds and new blooms. Yay! The Coleus seem to be filling out the containers crazy-well, and I've even had to prune back in order for the Zinnias to share in the sunlight! Coleus are so hardy and provide such a wonderful result without a lot of fuss, that it's no wonder that there were so many different kinds at the conservatory when Dana and I visited. 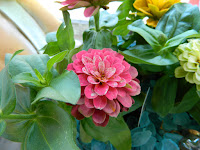 One of my favorite Zinnias has to be this bloom that probably has some kind of disease, but I love how unique it looks! Just like any feel-good movie, I'm accepting its differences and learning to love. 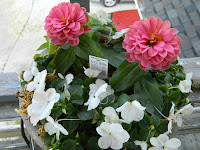 I don't really remember Gram planting many Impatiens in her gardens, but I've kind of made the realization that it's not necessarily about planting what she planted, but rather just planting at all. I know that she'd be happy with my choices because I liked them. I'm keeping the Snapdragons around, too, although they seem to be a little fussier than last year. Gram always knew when to make a fuss!

When she passed away, my parents and my gram's niece took her cats. Since then, all have passed away, with the last one unexpectedly departing the day before yesterday. It's kind of a sad chapter to be completed in our lives, but I'm sure that they're happily reunited somewhere in the cosmos.

at 9:17 AM
Email ThisBlogThis!Share to TwitterShare to FacebookShare to Pinterest
Labels: Gardening, Grandmothers, Plant-life